What a joy!! Last night at 54 Below, Bianca Marroquin put on a show! An autobiographical celebration of her 12+ years in the business with little sketches of almost everything she has done since today.

Talk about a career filled with passion, talent, love, heartbreak, faith, persistence, victory and inevitable success. From back alleys of Broadway theaters to dance floors, or from  dressing rooms of syndicated TV shows to recording vocal booths, she has been everywhere with her own vision and integrity.  And we were there at the legendary building of Studio 54 in New York City to witness her exciting, inspiring journey.

Her theatre achievements were showcased with her musical director Tom Gallaher on piano, who designed and architected this show together with Marroquin. From being a swing at “Rent” to being the star of a Disney “Marry Poppins..” Or from being a dance coach at “Phantom of the Opera” in Mexico CIty to being the “One and Only” Roxie Hart of “Chicago” on Broadway, she carried us through her way with laughter and heart beat.

And that was only the first portion of the full magic. Next, she showcased her versatility by transfering into her TV career where she talked and danced about her successful 4 year run of “Mira Quien Baila” (Latin franchise of “Dancing with the Stars”) and the anthem from her telenovela “Pequenos Gigantes.”  The song ”Esperanza del Corazon” carried us into her latest adventure when the moment finally came and she whispered the words “And then I decided to do an album.”

That was her introduction to the next part of her show where she performed songs from her first album “El Mundo Era Mio.” She sang live 6 tracks “One Lie,” “Miss Out On You,” “Something More Than Sideways” as well as the title track with precise perfection of a recording. The full band accompanied her with Tom Gallaher on piano, Dennis DelGaudio on guitars, Steve Singer on drums, Vincent Fay on bass and Marshall Coid on violin.

At the end of the show, she announced her new upcoming album in September which is composed of Mexican traditional folk songs. She sang two numbers from her new project “Perfidio” and “Toda Una Vida” . 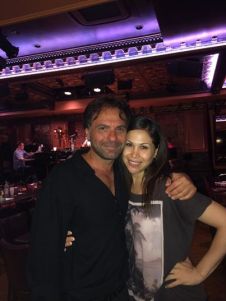 In overall, the audience was amazed and electrified with her energy, her versatility as well as her personality on stage. A Broadway star, a famous TV personality, a dancer and a recording artist.. What more is in the horizon? It is for us to witness while we enjoy the joyride. Congratulations Bianca, you are a true star!!