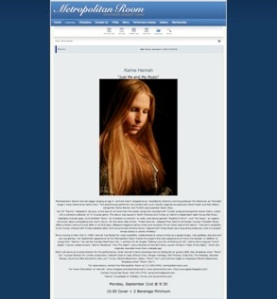 Montreal-born Karine Hannah began singing at age 4—and she hasn’t stopped since. Heralded by Grammy-winning producer Jim Steinman as “the best singer I have heard since Celine Dion,” the powerhouse performer has worked with such industry legends as producers David Foster and Rick Allison, songwriter Diane Warren and Turkish pop superstar Sezen Aksu.

Her CD “Karine,” released in January, is the bounty of more than five dozen songs she recorded with Turkish producer/songwriter Ayhan Sahin, culled into a cohesive collection of 15 musical gems. The album was issued in North America and Turkey on Sahin’s independent label Young Pals Music.

Highlights include sassy, funk-fortified “Gone,” an invitation to commit—or walk; rock-dance gambol “Breathe It All In”; and “Far Away,” an organic strummer about anticipating her man’s return. On the other side of love, “Frida’s Sonnet,” adapted from Sahin’s full-length musical “Swedish Style,” offers a forlorn tome of a love affair in its final days. Billboard magazine senior writer and reviewer Chuck Taylor said of the album, “Hannah’s versatility is her trump, imbued with innate celestial talent and consummate emotive fervor. Aligned with these dozen-plus sing-along treasures, here is a project whose stamp is utterly timeless.”

Since moving to New York in 1998, Hannah has flexed her vocal versatility, trademarked at various times as a gospel singer, rock goddess, pop diva and soul songstress. Her September appearance at the Metropolitan Room marks the singer’s first solo appearance at home this decade. In addition to songs from “Karine,” her set list includes Steinman’s No. 1 anthem for Air Supply “Making Love Out of Nothing At All”; Celine Dion’s popular French staple “L’amour existe encore”; Benny Mardones’ “Into The Night”; and a favorite of Hannah’s fans, Lauren Christy’s “Color of the Night,” which she originally recorded more than a decade ago.

“Karine” is available on CDBaby, iTunes, and ayhanonline.com.